Hands on House Half Marathon

This past Saturday I ran the Hands on House Half Marathon in Lancaster.  I had talked my running buddy, Armand, into running it as well because my dad had plans and Todd was running a marathon in New Hampshire the next day.  We arrived plenty early which resulted in a good parking spot.  The event also featured a 5k and 10k event, each with its own packet pick up tent which kept things very organized.  Our goodie bags included very nice long sleeved tech t’s, a pair of socks as well as the usual coupons and ads.  There were plenty of port-a-potties and hand washing stations available.

My original goal time was a 1:55.  I ran a 1:59 in the Blue-Gray Half Marathon last October and had been running strong all summer and racing well, so I considered that to be a reasonable goal.  Todd felt I could run faster than that, but I figured anything faster would just be a bonus.

All the runners lined up at the same time with the half marathon starting first followed by the 10k and the 5k.  Armand and I started somewhat close to the front since we weren’t exactly sure where the half marathon runners ended and the 10k runners began.  The weather was superb particularly after an especially hot, humid and rainy summer.  Rain was my biggest fear as race day approached; I can handle running in 90 degree temps but am absolutely miserable running in soaked shoes.  Armand joked that I probably didn’t need my sunglasses given the clouds at the start, but I told him that they were part of my outfit.  They would come in handy later in the race as the sun did eventually appear.

The majority of the course was ran on back country roads and past farms; my preferred type of scenery for running.  I knew the course for almost the first four miles thanks to a long run with the group in July.  I started out at a solid pace with my first mile at 8:23.  My second mile would prove to be my fastest at 7:52 which looking back was probably a tad too fast, but I was feeling fine at the time.  The next two miles stayed under 8:30 pace and the fifth mile clocked an 8:49 due to a small hill.

The sixth mile saw my sub 8:30 pace return as we descended down a rather long hill.  The original course had been changed due to a footbridge under water.  This meant rather than cross a covered bridge and continue onward, we would be turning around after the bridge and climbing back up the hill.  It was very hard to not get mentally psyched out watching other runners pushing up the hill as I was almost free falling down it.  I had heard about another hill later in the course and was hoping the first one wouldn’t burn me out too much.

After utilizing the water station before the covered bridge, reaching the turn around point and seeing Armand not too far behind me, I made the decision to pop a Honey Stinger chew in my mouth.  Physically I did not feel that I was sweating enough to need it, but mentally it became a distraction for me as I began the ascent.  I kept playing with it in my mouth and focusing on that rather than thinking about the length of the hill.  The hill was twofold with the first section being very steep.  In my head I began singing “Put one foot in front of the other” from the old children’s Christmas movie “Santa Clause is Coming to Town”.  I’ve done that on training runs and it seems to help.  The second portion of the hill felt much easier as it became more shallow.  Surprisingly the hill didn’t feel as long climbing up it as it had felt running down it.

The next decent hill came within the next mile and although not as long, felt a bit tougher given my legs hadn’t fully recovered from the first one.  Ironically it was on the road with the farm that has the tiny house Jason and I stayed in earlier in Sept.  The hills resulted in times of 9:20 (slowest of my splits) and 9:07 for miles 7 and 8.  I thought the hardest parts were finished and that I could go on cruise control for the remainder of the race.

Unfortunately that proved to be wrong when I began a descent down the steepest, curviest hill I have ever ran in my life.  I kept my arms out to my sides and my fingers spread to keep control of the free fall.  I don’t consider myself to be a strong downhill runner and that hill proved me right.  The top of my left foot kept slamming into the top of my shoe and my hamstrings and calves were screaming at me.  I was grateful to finally reach the bottom of the hill and have a short flat section to run before climbing a small hill again.

Mentally miles 8 to 9 and 9 to 10 are usually my most difficult when training.  Those are the miles I tend to just get bored.  After getting ripped apart by the downhill all I could focus on was getting to mile 10.  In my mind mile 10 would make it all better because then I only had a 5k left to run.  Mile 10 is where I realized I could break 2 hours in the Blue-Gray Half Marathon and I became stronger and more determined.  Mile 10 was going to be where I refreshed and finished strong.

At an 8:41, mile 10 was not my saving grace.  Nor was mile 11 at an 8:44.  Even with Armand catching me and running alongside me I was spent.  I had already looked at my overall time on my Garmin and knew even if I slowed to 10 min mile pace I would still hit my 1:55 goal time.  I think knowing that just fueled my mental laziness.  I was grasping at straws trying to find some sort of motivation to push harder and wondering how on Earth people run full marathons.  At one point I saw a small van with passengers in wheelchairs.  I thought to myself “You need to run hard because they can’t enjoy running”.  That motivated me for maybe a quarter mile before I resorted back to the mentality of just finishing the race.  Mile 12 was a 9:14.

The final 1.1 miles was just about finishing.  At one point I thought I would vomit, something I’ve never done during or after a run.  Armand knew I was beat and I encouraged him to go as we approached the final downhill turn into the finish line.  He finished a few seconds ahead of me.  My chip time was 1:53:16. 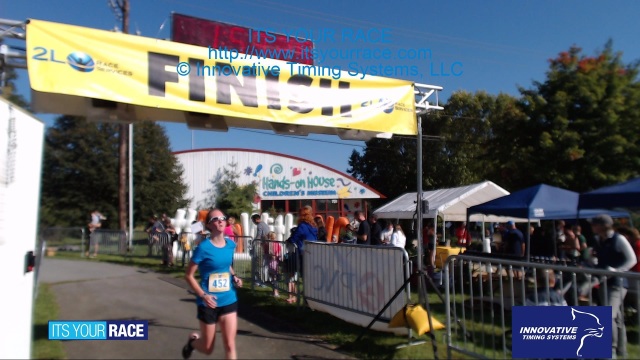 No smiling across the line like I did at the Blue-Gray half marathon, I was just grateful to be finished

I felt nauseous again after finishing, but fortunately did not have to sit due to being lightheaded like I did after the Blue-Gray half marathon.  Armand and I got some fruit and water and walked back to the car.  He wanted to run a cool down and though I usually don’t join (I do “stretch downs”) I attempted to go with him.  My quads could barely move and I shuffled along for a bit until he went to finish on his own and I made my way back to the car.  I was never so happy to change from my running sneakers into my New Balance sandals.

Armand and I headed over to the awards area and realized there was a laptop setup where people could enter their bib numbers and get a little printout of their results.  I entered mine and saw under division it read “3”.  I was slightly confused, not thinking there was any way I could have placed.  Armand’s read “3” as well so we stuck around to find out the results.

All the mental anguish and physical defeat I had felt during the last three miles of the race were vanquished when my name was read off as 3rd place in the 30-34 age group.  I was surprised, happy and felt accomplished.  There was actually an error in calculating the oldest age group, and Armand had won the 70+ category.  We proudly collected our growler awards; I initially thought they had root beer in them since I saw a homemade root beer for sale stand along the course.  They turned out to be empty, but were still neat awards. 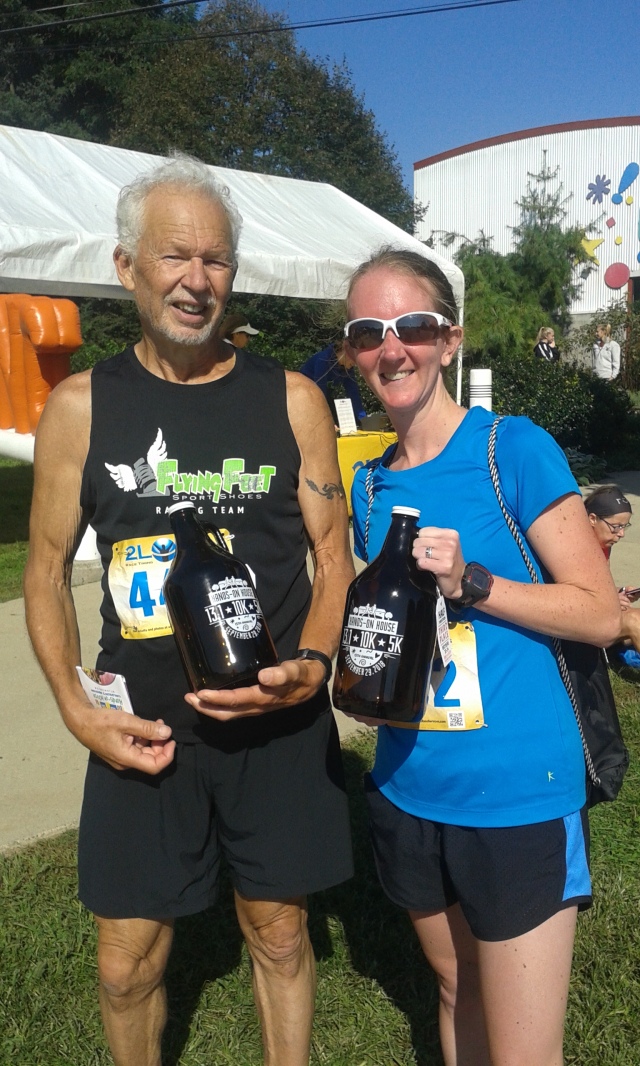 Armand and me showing off our awards

I am still mentally processing the race itself and will likely have a follow up post at some point with my thoughts.  I know I ran a really great time, but I’m just not used to finishing a race with no kick or at minimum feeling strong.  In general though the race was extremely well organized from the check in to the aid stations to the awards.  The course was beautiful and challenging.  I’m glad I chose it and would certainly consider it again in the future.

15 Responses to Hands on House Half Marathon