The York Winter Series wrapped up this past Saturday with its final race, the Northeastern 5k.  I had actually pre-ran the course with Jason, my dad, Todd and Armand as part of a 6 mile run two Sundays prior.  We weren’t entirely certain that all the turns in the development were correct, but I had a general idea of what to expect. 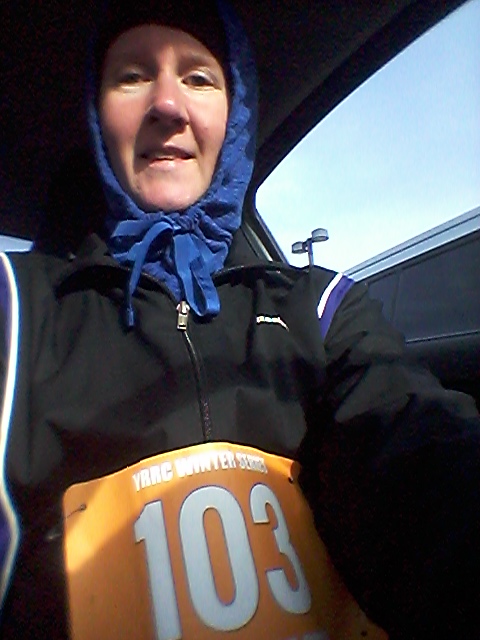 Ready for the last race in the winter series

Mother Nature saw fit to remind me that I was indeed running a winter race by providing strong winds and a below freezing temperature to start the race.  As has happened many times this winter I stuck contemplating what exactly to wear.  Do I wear the warmer running jacket or the windbreaker?  Do I leave the windbreaker pants on over the leggings or take them off?  I plan to write a blog entry just focusing on all the things I learned by running the winter series which will definitely include a section on clothing!  I finally settled on the windbreaker jacket over two long sleeved running tops and just the leggings along with my usual headband and heavier gloves this time instead of the thinner running ones. 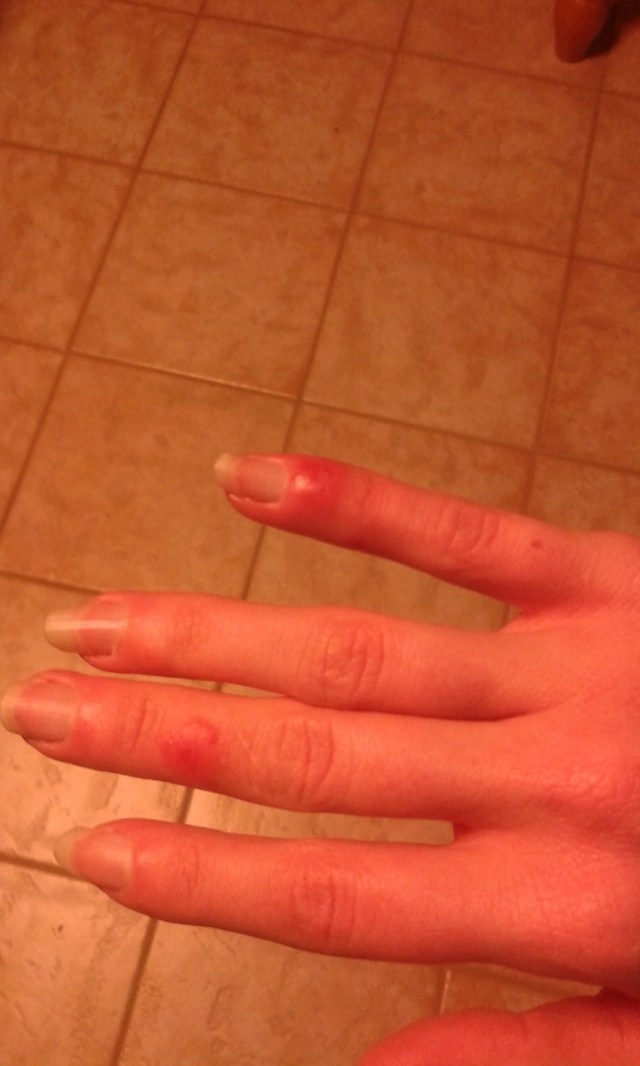 When chilblains strikes keeping the fingers warm is a must

I had no goal for the race as the wind would make it very challenging to run a decent time.  I also was continually 6th in my age group so there was no chance at placing in the series.  I was content to just run the race knowing I had ran more over the winter than any year since high school.

My dad decided to not run the race having other tasks to complete at home and not being thrilled about the strong winds.  Fortunately Todd and Armand came; it’s always nicer going to races when you have people to warm up with and debrief with after the race.  Armand and I agreed to stick together like we did in the Springettsbury 10k.

The first mile was relatively flat with a slight uphill grade at times.  It was a tad annoying though as we had to stick to the shoulder of the road which limited the ease of passing people.  I also had to keep dodging York Road Runners Club traffic cones.  The worst part, however, was the mouth breather.  Armand and I passed him, but he remained within hearing distance.  I will never understand how some people can breathe so heavily within the first half mile of a race.  I expected to lose him by the mile mark (an 8:15) but he persisted despite Armand and I picking up the pace.

The second mile went through a development and the wind was to our backs which made going uphill a lot easier.  My left arch twinged and reminded me that I really need to buy new running shoes.  It was the third run in which that has happened and normally when I start feeling unusual random pains like that it’s a sign that my shoes are wearing out.  My watched beeped an 8:05 for the second mile and we were heading into the last third of the race.

Turning a corner the wind suddenly became a headwind again, and I felt like the “one step forward two steps back” stereotype.  The air also chilled me as I had warmed up a great deal by that point, forgetting just how well Under Armour’s coldgear shirt works.  I told Armand when we had a half mile to go and he told me to go ahead, but I said I didn’t want to risk kicking too early.

With about a quarter mile to go I did pick up and enjoyed the downhill curve into the high school parking lot.  When I pre-ran the course I realized how deceptively long the final stretch was and determined what spot I would turn on my final sprint.  My watched beeped a sub 8 min mile at the 3 mile mark.  There was a girl ahead of me who I had beaten in the past and my desire to beat her again kicked into gear.  Needless to say my predetermined “go mark” went out the window when I decided I wanted to beat her.  I passed her and was running as hard as I could, hearing her footfalls fairly close behind me.  It was strange not hearing my dad’s usual “Come on Trac!” as I approached the finish.  Instead my brain was screaming at me “Why are you doing this to yourself?!?” as I fought to continue my kick the rest of the way to the line.  Stunned to see the clock just flipping past 25 minutes, I finished with a final time of 25:05.

I finished 6th in my age group once again with the 5th place girl running a full 2 minutes faster than me.  I was still extremely impressed with my time though given I didn’t really do speed training this winter and the winds were so strong.  Since I completed 5 of the 8 races (it would’ve been 7 had one not been cancelled due to weather and another I was both sick/the weather was miserable for running) I got a YRRC Winter Series headband as a participation award.  I also got a free mini Rita’s root beer ice.  It was a satisfying end to what was a challenging, eye opening experience in running the series for the first time.